The Internet, mirrored by GPT-3

GPT-3 mirrors reality as it has been recorded by humans in text. Unlike a library of text, it doesn’t store static records, but rather dynamic virtual realities.

One of the virtual realities folded in GPT-3 is a hallucination of the Internet. I’ve created a window into parts of that multiverse that can be represented as Google search results and Wikipedia articles.

Given any search query, GPT-3 generates a page of Google search results, complete with urls, preview text, and dates.

I generate n Google results in parallel threads, so the information about each page is independent. This is usually ok, but sometimes results in inconsistencies between the results (a purported news event happening in different years) or repetition (in the “openAI” search in the video demo, almost every result had the domain “openai.com”, whereas real Google would file the domain duplicates under “More results from openai.com »").

After that there’s a bit of additional processing to get the date in the right format, and cut off the title, url, and preview text if they’re too long.

I also tried few-shot versions of the prompt, using the same pipeline but prepended with examples drawn from actual Google search results.

I found that results were overall worse than for the zero-shot prompt. The dimension that they were worse in was generality: GPT-3 to “overfit” the examples, resulting in pages that were less varied and customized to the particular search term.

Searching the real Google for different things returns very different sets of results. Searching for a well-known scientific concept like “total internal reflection” returns links to Wikipedia, The Physics Classroom, and Nature, whereas searching “gamestop stock price” gets you mostly news articles. A different search might return mostly results from personal blogs or reddit threads. 7 examples could not possibly represent the great diversity of behaviors that the function “Search Google” encapsulates. Having many more varied examples would probably improve generality somewhat, but a long prompt makes API calls more expensive - and besides, 0-shot works perfectly well in this application.

A 0-shot prompt forces GPT-3 to rely on its prior of what a Google search might return instead of trying to generalize from the examples. In the examples above, search results for time-reversed decision theory resulted in pages from “cs.berkeley.edu”, “arxiv.org”, and “scholarpedia.org”. universe shaped like donut resulting in science news articles from “discovery.com” and “telegraph.co.uk”, but also posts from sources like “blog.cosmicvariance.com”. holographic hat returned an interesting variety of domains, from “holistichealthfacts.com” to “bibleprophesy.com” to “gocomics.com”. Each search gives a unique but coherent glimpse into a slice of the mirror internet.

The downside is that few-shot demonstrations give me less control over the format of the continuations, such as the date format or the length of the preview text. These minor problems are solved by postprocessing. 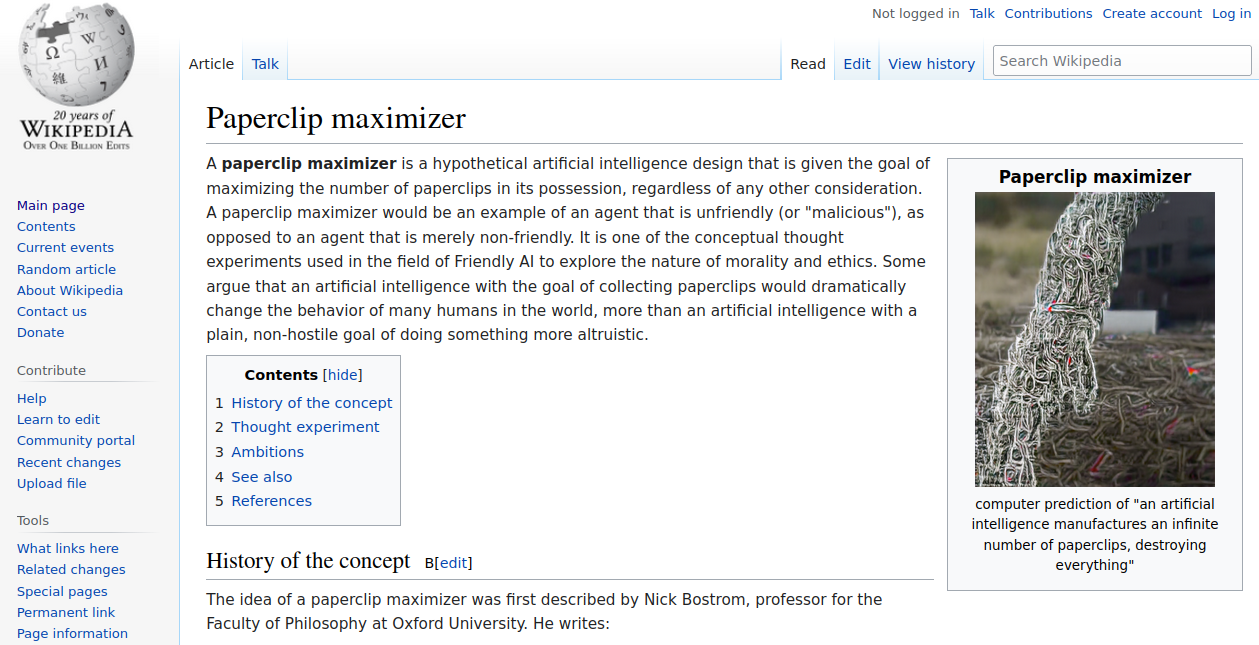 The Wikipedia generator takes the title of the page as input and generates a Wikipedia article.

“The loom of time”

“Treaty on the Prohibition of Artificial Intelligence”

“EleutherAI” (intro=EleutherAI is an open-source collective)

Generating Wikipedia pages is more challenging than generating Google search results because of the open-ended format: there could be any number of sections, some possibly nested under others, and the text of each section can be of arbitrary length. My solution involves an “unfolding metaprompt” template, heavy use of logit masks, and counterfactual parsing.

Additionally, a logit mask is constructed which is applied to only the first token of the introduction:

Finally, if the finish_reason of GPT-3’s continuation is “length”, the response is subject to counterfactual parsing.

Next, the table of contents is generated. This is by far the most complicated part of the pipeline. The target is a well-formatted table of contents, optionally with nested sections, like this:

The following prompt fragment is appended after the introduction prompt + text

To ensure a well-formatted table of contents, no less than four logit masks are used at various stages of generation.

The first is applied to only the first token of the table of contents:

This mask forbids several tokens which represent possible failure modes, which I experienced as I began to implement TOC generation: following ‘1’ with ‘2 3 4 5’ or ‘.’ instead of a section title, newline, or ‘Browse Wikipedia’.

After generating the first token of the first section title in the TOC, I generate the rest of the first line (until newline) using the following mask:

This prevents the failure mode where it puts ‘2’ on the same line instead of a newline.

For the first part of the second line, which should be a number, I use the following mask

Once the first line and second number are in order, GPT-3 is very reliable at generating well-formed tables of contents. The rest of the table of contents is generated in one go, with the logit mask:

The increasing penalty on high numbers incurs a softly increasing cost on the table of contents getting too long, and there is a slight boost on ‘References’, which also encourages it to wrap things up.

After generating the table of contents, I generate the text of each section named in the TOC. At this point, we’ve already generated enough information (intro + TOC) that we’re clearly making a Wikipedia article. Thus, I drop the narrative prompt at this point, and the prompt is just

For the first token of each section, I use the mask

anti_num_mask is a mask which forbids any number, to prevent the failure more where GPT-3 starts to list the next section immediately.

I don’t use a logit bias for the rest of the section, but I do use counterfactual parsing if the section text goes on for too long.

Prompts for subsequent sections contain previous sections in their prompt, unless the article is too long to fit in GPT-3’s context window, in which case the early sections are cut off, and GPT-3 only sees the sections immediately preceding the current one. The introduction and table of contents are always in the context window to encourage global coherence.

Control is more difficult when completions can be arbitrarily long. Both the Google prompts and parts of the Wikipedia prompts rely on quote delimiters to signal the completion of the semantic task. As the enclosed text becomes longer and includes multiple paragraphs, this method alone becomes less reliable.

I also used counterfactuals to terminate sections if they got too long by locating the highest conditional probability of multiple newlines or the next section beginning.

End of the internet?

GPT-3’s mirror of the internet is not quite ready to replace the traditional internet. Give it two years.