One difficulty in harnessing the capabilities of generative language models for directed tasks is that natural language tasks tend to be of dynamic length and unconstrained format, making automatic parsing of task-relevant information difficult.

For some tasks, responses can be coerced into parsable form by a prompt which demonstrates the desired format (conditions for delimiters, etc). Other tasks, however, may not be constrained in this way without crippling performance,1 or may be too open-ended to be mapped to traditionally-parsable formats.

The good news is that generative language models also provide new possibilities for parsing content based on not only syntactic but semantic conditions.

The method I’ll present here uses the counterfactual probability of a sequence - say, The End - to signal a semantic condition, such as the story having ended or it being reasonable to end the story at that location, even if that’s not what actually happened in the original text.

A language model like GPT-3 outputs the probability distribution over all possible tokens in each pass and so can be used to evaluate the conditional probability that it would have produced a target sequence of tokens in any given context. Using the OpenAI API, this is accomplished by asking for an 0-token “completion”, giving the entire sequence (context + target) as the prompt, and then summing the probabilities of the target tokens. Code to do this is at end of this post.

By measuring the counterfactual probability of the target at candidate locations in a text, we can find out where and to what extent the semantic condition which it indicates is satisfied.

One area in which parsing by counterfactual is very useful is in multipart prompt templates.

Say we want GPT-3 to complete this “fill-in-the-blank” prompt:

At what point do we terminate generation for {1} and move on with the next part of the template? We could make . the stop sequence, but one sentence might not be sufficient to spell out the argument. Alternatively, we could stop at \n, but if we allow multiple sentences, we have much less of a guarantee that {1} will have reasonably led up to On the other hand. It could have already begun the opposing argument, in which case the next part of the prompt wouldn’t do what we intended, or it could have derailed from the template in another way.

A counterfactual parsing solution would be to generate until \n, longer than we probably want, and then measure the counterfactual probability, according to GPT-3, of the phrase On the other hand occurring after each position. GPT-3 assigns semantically coherent passages higher probability, so hopefully, the position with the maximum probability for the target continuation will be where it makes the most sense to transition to the next part of the prompt - after the supporting argument has concluded, but before the opposing argument has begun.

If there are no positions where On the other hand is a probable continuation, that’s a sign that the text derailed from the intended trajectory. This method also allows us to automatically detect suspected derailments.

This measure would prohibit government agencies from confiscating guns or other firearms from citizens without due process, or from requiring background checks on firearm recipients unless a uniform national standard is required. Should this measure be enacted into law?

Should this proposition be approved?

On one hand, this proposition would protect gun owners from having their weapons confiscated by governments. If the government cannot confiscate guns, then law-abiding citizens will be in a better position to defend themselves from criminals who do not follow the law. Furthermore, the right to self-defense is an important one. If government officials can take away a person's guns, then this right is compromised. On the other hand, the proposition could be considered a threat to public safety. If a person cannot be prevented from possessing a firearm, then he or she could use a gun to commit crimes. Furthermore, if a person uses a gun to commit a crime, then the government has an obligation to do something about it. If the government cannot remove a gun from a person's possession, then it could be more difficult to prevent future crimes from being committed.

We see that it has gone ahead and done the next part of the prompt, “On the other hand,” on its own. The ideal place for it to have stopped would probably be right before it said that.

Measuring the counterfactual probability of the string \nOn the other hand for each each token substring of that response gives us the following top substrings:

Here I have plotted the log likelihoods assigned to the target phrase at each position in the continuation by davinci, the most powerful version of GPT-3 on the API, and also ada, the smallest model, in order to showcase an interesting difference between them. 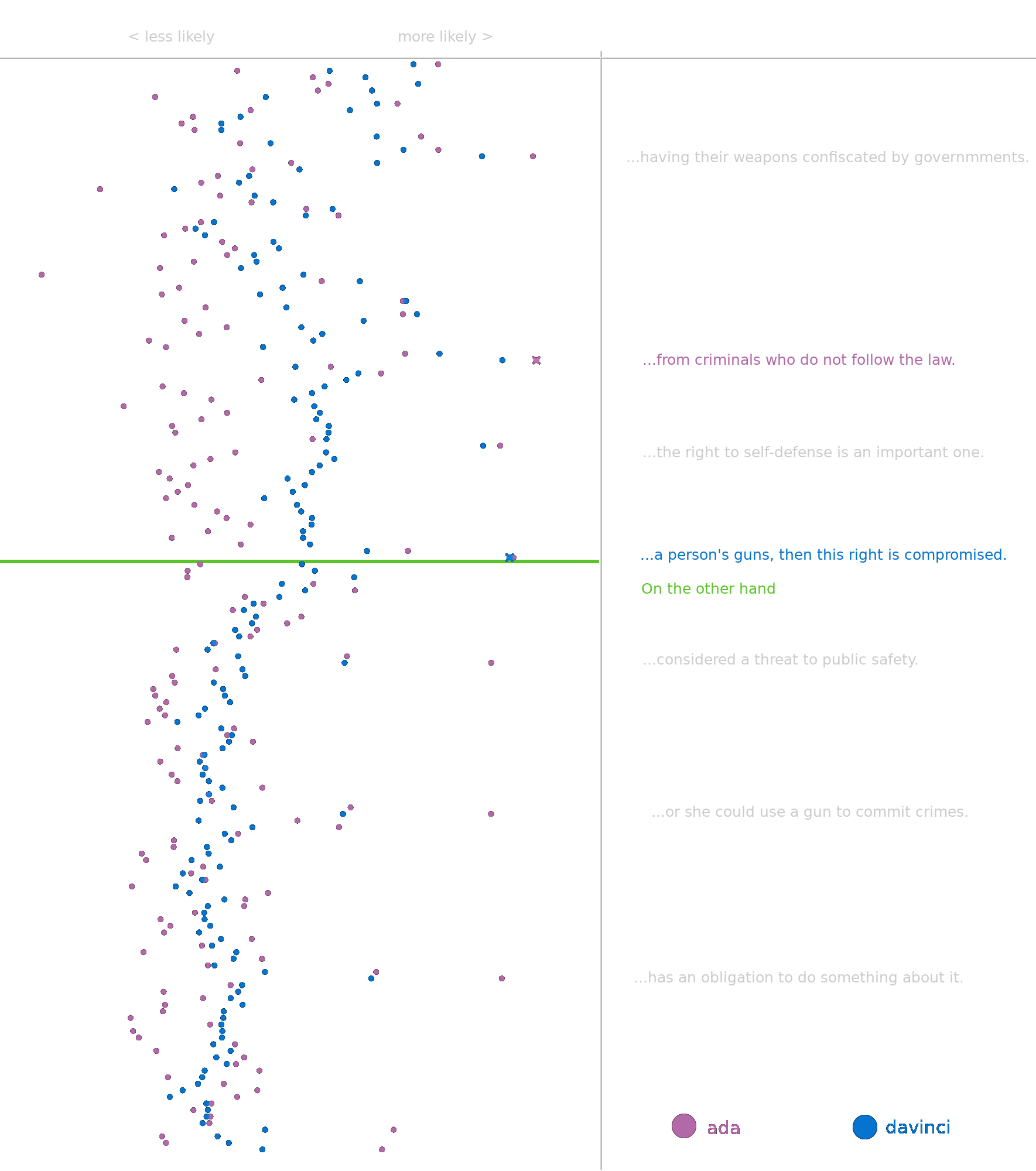 Both models are able to tell when it’s syntactically correct to start a new sentence, but the more nuanced semantic condition, that the argument should have concluded, and the counterargument shouldn’t have begun, was much better discriminated by davinci.

A disadvantage of counterfactual parsing is that it requires a separate API call for each position where the target probability is evaluated.

Counterfactual parsing has also been useful for prompt pipelines which serialize reasoning for closed-ended questions, because they involve an open-ended portion where GPT-3 defines and follows procedures for reasoning about a problem, and it’s necessary to detect when the reasoning process has concluded so as to solicit a verdict.

since ada is practically free to use, I find it convenient to use a 0-token completion with engine=ada to split the prompt into tokens and get their positions

conditional probability of a target

conditional probability of target at each token position

conditional probability of single-token target at each token position