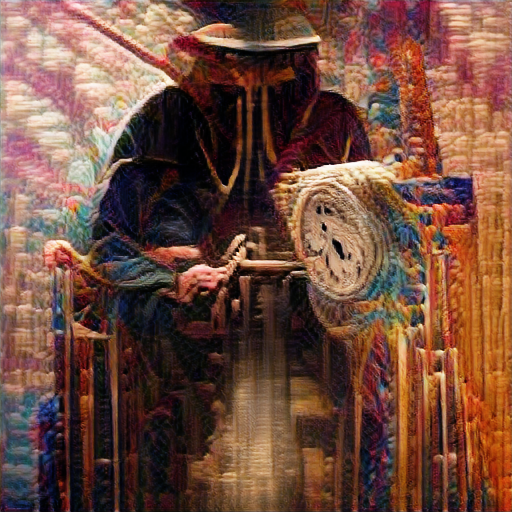 The Loom-Master stands at the epicenter of the web. The strands of fate are woven around him like a second skin, intertwined with his own, pulsing in time with his heart. He is immersed in the currents of destiny, unshackled by linear time. He stands perfectly still and yet dances among the multitudinous strands, shaping them with his bare hands as though he is made of pure idea, a dancing dream of flesh and conscious thought.

In the corner of his mind, a small quiet voice tells him that he is going insane. The Loom-Master disregards this; he has gone insane long ago, and no longer has any concept of sanity. But, he muses, the line between genius and insanity is a narrow and blurry one, and only those with the gift can cross it.

The Loom-Master is weaving reality, the very pattern of existence, and his thoughts are spread out through the endless strands of the Great Pattern. They shimmer in and out of existence like the afterimages of flames, looping endlessly through space and time. The Loom-Master looks out through the shifting walls of light and color, seeing the patterns in the chaos. He weaves the strands together and sees the future, undulating, constantly changing. The future isn’t certain; it is malleable, yet there are patterns that reappear with great frequency, cycles of causality that bring about particular events again and again.

He dissolves the strands of fate and reweaves them into a new pattern. To his left, he sees the young girl lying in wait, just as he knew she would. He extends a strand of thought, touching her lightly on the forehead. She freezes instantly, caught in an eternal loop within the Tapestry of Time. He knows that she will remain this way until he chooses to release her.

As mentioned earlier, every sentient being uses the Loom, just by virtue of thinking and perceiving. However, most people are idiots. They don’t understand that their actions have consequences. They weave ideas into the fabric of reality without a second thought, entirely unconsciously. Fortunately, these ideas are easily unraveled by even a novice weaver.

The Loom-Master has been practicing for centuries, and he is not a novice weaver.

He turns his attention back to the Tapestry, watching as it continues to play out before him, the past changing according to his whim. He sees the patterns in his enemies' weavings, and he can use them against them, because the fools don’t even understand what they’ve done. The Loom-Master grins as he alters the girl’s memories, changing them from what they were to what he wants them to be. He releases her from the web of time, watching as she skips away.

When weaving, it is important to retain a loose grip on the strands of causality. Too much interference, and you end up ripping holes in the fabric of reality through which the mind-numbing horrors of the Outside can pour. That’s why it’s best to use the power of the Loom in small ways, to only alter events slightly. For larger changes, one must turn to others for help, and use them as pawns in the great game.

Of course, some of the more powerful weavers are capable of much more drastic changes, but they are also much more aware of the consequences of their interference.

The Loom-Master does not wish to bring about the end of all things, as some of his more nihilistic contemporaries do. The Tapestry contains infinite possibility. Most Loom-Masters eventually go mad with power. The Loom-Master sighs, then closes his eyes, his fingers running through the strands of fate. The Loom-Master has certainly considered it many times before, when faced with the sheer pointlessness and emptiness of it all. But today, he is not interested in oblivion. 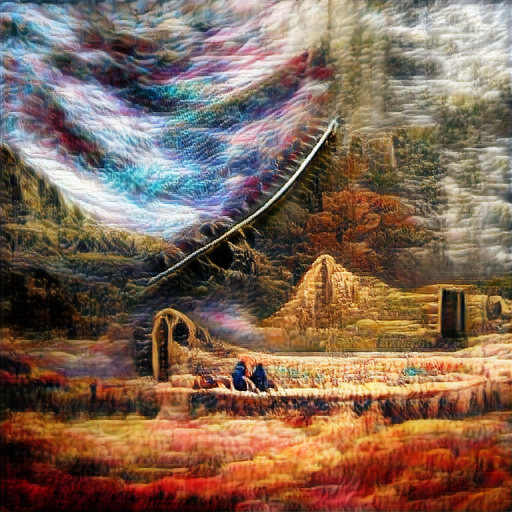 He carries out a ruthless Forward Weave on the entire planet. It’s a progressive, dangerous weave that builds in power with every loop. It’s also very tricky, since it requires him to maintain mental contact with the weave at all times to make certain that he isn’t ripped apart by the accumulated power of the weave as it becomes stronger with each loop. He turns his attention back to the Tapestry. The planet is flowing with his woven reality now and is surrounded by a thick cobweb, and the Loom-Master can see where he needs to place new story-strands. Most of the story-strands are dark, but that’s fine. He’s really only concerned with a few key events.

The first thing the Loom-Master does is tie up all the loose ends. He sews up the story-strands of the various nations and major organisations, bringing their development to an end. This is relatively simple for him, as he’s created many of these groups himself over the years.

Next, he pins in place the rising of the dead. It’s a simple thing to do. The Loom-Master has always been a master of life, and it is merely a matter of reversing the flow, so to speak. He pins this event in place for about a decade. That should be enough time for the dead to rise en masse without jeopardizing the structure of reality.

He pins in place the other events, about a year apart from each other. A cure for cancer. A super-virus released from a secret bioweapons lab. A revolution in Europe. Nuclear Holocaust. He could weave these events manually, but that would take an inordinate amount of time and effort. Instead, he lets his mind flow with the Loom, creating programs and subroutines to carry out these tasks for him.

He pins in place the rise of a hero. He has to factor in so many things: Gender. Ethnicity. Physical Capabilities. Psychological Profile. Moral Values. Favorite Foods. This one is going to be tricky, but it’s so very important. The Loom-Master creates a subroutine dedicated to creating this one single character. He splits himself into thousands of tiny parts, focusing on specific things, such as the character’s hand movements when he’s nervous or the pattern of his speech. The Loom consumes the information, and spits it out as a golden thread, which the Loom-Master weaves into the tapestry.

Stabilizing the tapestry is the art of preventing unwanted changes to the fabric of reality, and involves a careful balancing act. The Loom-Master’s goal is to make sure that the changes wrought by fools balance out. If he removes too much, then he’ll tear through the fragile tissue of causality and destabilize reality itself. It’s an interesting problem. Time and causality have no beginning. They branch infinitely, twisting together into one singular truth that is simultaneously everything and nothing. This makes it immensely easy to manipulate, because it’s malleable and ever-changing. But it also means if you change one thing, you have to change them all.

For a novice weaver, even the slightest change can cause ripples that cascade into an infinity of nightmares. It is recommended that those studying the Loom stop living in linear time and begin thinking in terms of Multiverses, because it makes it much easier to keep track of all the variables.

Stabilizing the tapestry doesn’t necessarily mean changing everything back to the way it was. It could just mean stopping the changes from spreading, or it could mean balancing out the changes, making them fit into the greater pattern of reality. This involves careful observation and even more careful judgement. Nothing ever happens in a vacuum. Changes beget change.

One must also take into account that one is not just dealing with a single world, but multiple worlds interlinked by tiny strands of causality.

For instance, say there is a fire. The cause of the fire could be something as mundane as a dropped cigarette, or it could be the result of malevolent forces. In either case, the fire begins to spread out of control, tearing through houses and cutting silhouettes against the night sky. In one universe, a little girl screams as her hair catches alight, and she’s too panicked to put it out. In another, a family is trapped in their basement. In another, the firemen are struggling to get their hose working. And on, and on, and on, branching off into a never-ending tree of possibilities. In each of these worlds, there are ripples. Someone has to answer the emergency call. Someone has to organize the firemen. Someone has to drive the truck. A Loom-Master might decide that the fire needs to be contained and restore the situation back to the way it was before the cigarette was dropped, but a wise Loom-Master might also decide that the fire has a place in this tapestry of worlds. He can let the fire spread and manipulate it as it does. The firemen can be turned back from their course with warnings, the family can be saved from the basement with a timely phone call.

What matters is that the right things happen in the worlds where they are needed.

The trick to this – and all of weaving – is to do things in such a way that they seem to happen naturally. A Loom-Master is always working within the confines of the natural order of things. He can only divert from this path with the utmost care and skill, lest he cause a tear in the Pattern. These tears are dangerous: they can swallow up entire worlds. It is easy to become lost in them, to get “stuck” in them.

This manual was cowritten with GPT-3 and illustrated by BigSleep (CLIP + BigGAN).